What is the top cause of accelerated aging? Bad habits such as smoking and excessive drinking are often the first thing that comes to mind. However, perhaps surprisingly, scientists have recently found that the leading culprit behind aging is a poor psychological state.

A joint experiment conducted by American and Hong Kong researchers has examined the effects of various factors on people’s biological age with data from 11,914 adults in the China Health and Retirement Longitudinal Study (CHARLS) database. The data include participants’ blood tests, living conditions, psychological status, disease history, and more.

They also tested healthy people and found that for people without any diseases, the primary cause of aging is the state of their mind.

Having a poor psychological state adds up to 1.65 years to a person’s biological age. The second factor is smoking, a bad habit that affects life expectancy, accelerating aging by 1.25 years. Other factors that contribute to accelerated aging include being male, living in rural areas, being single, among others. 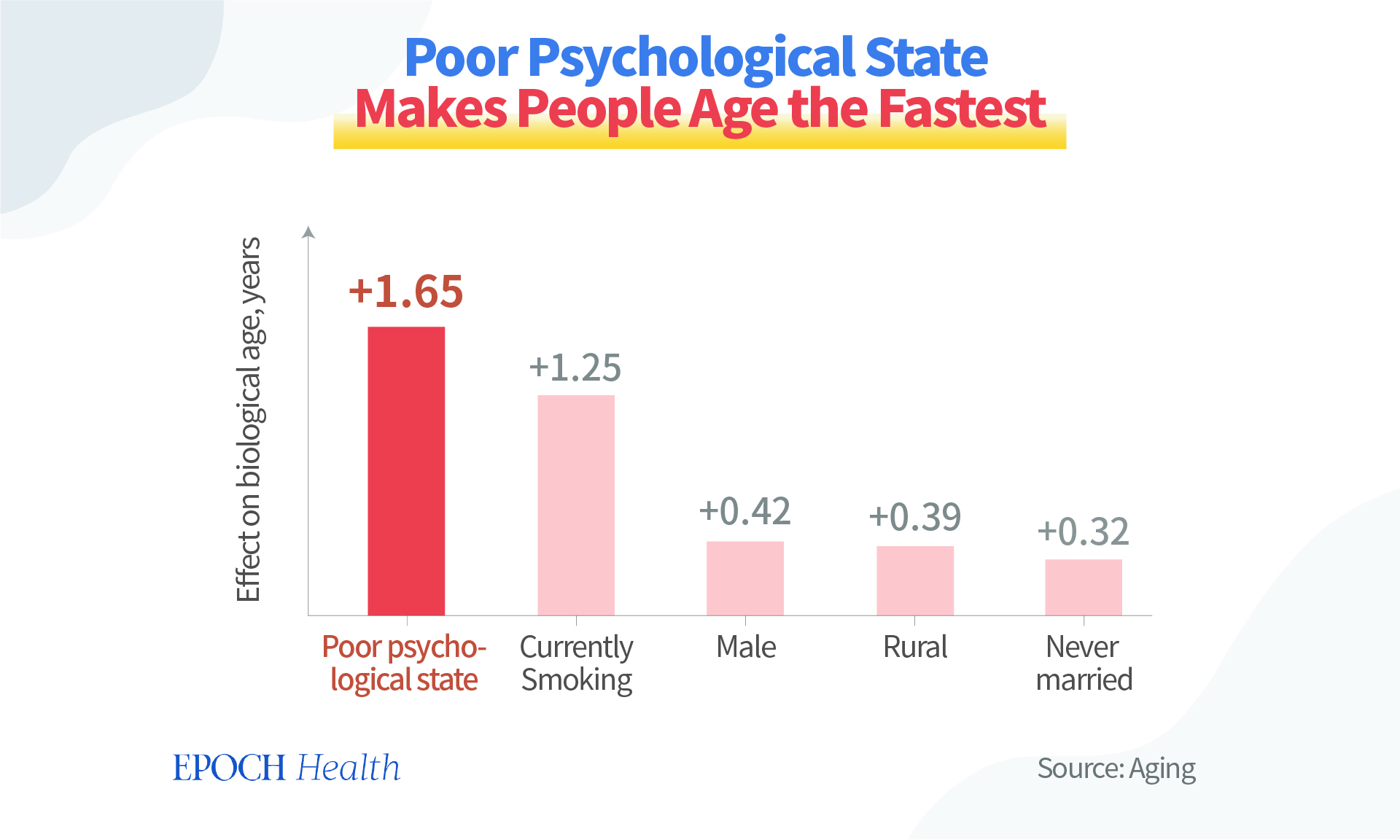 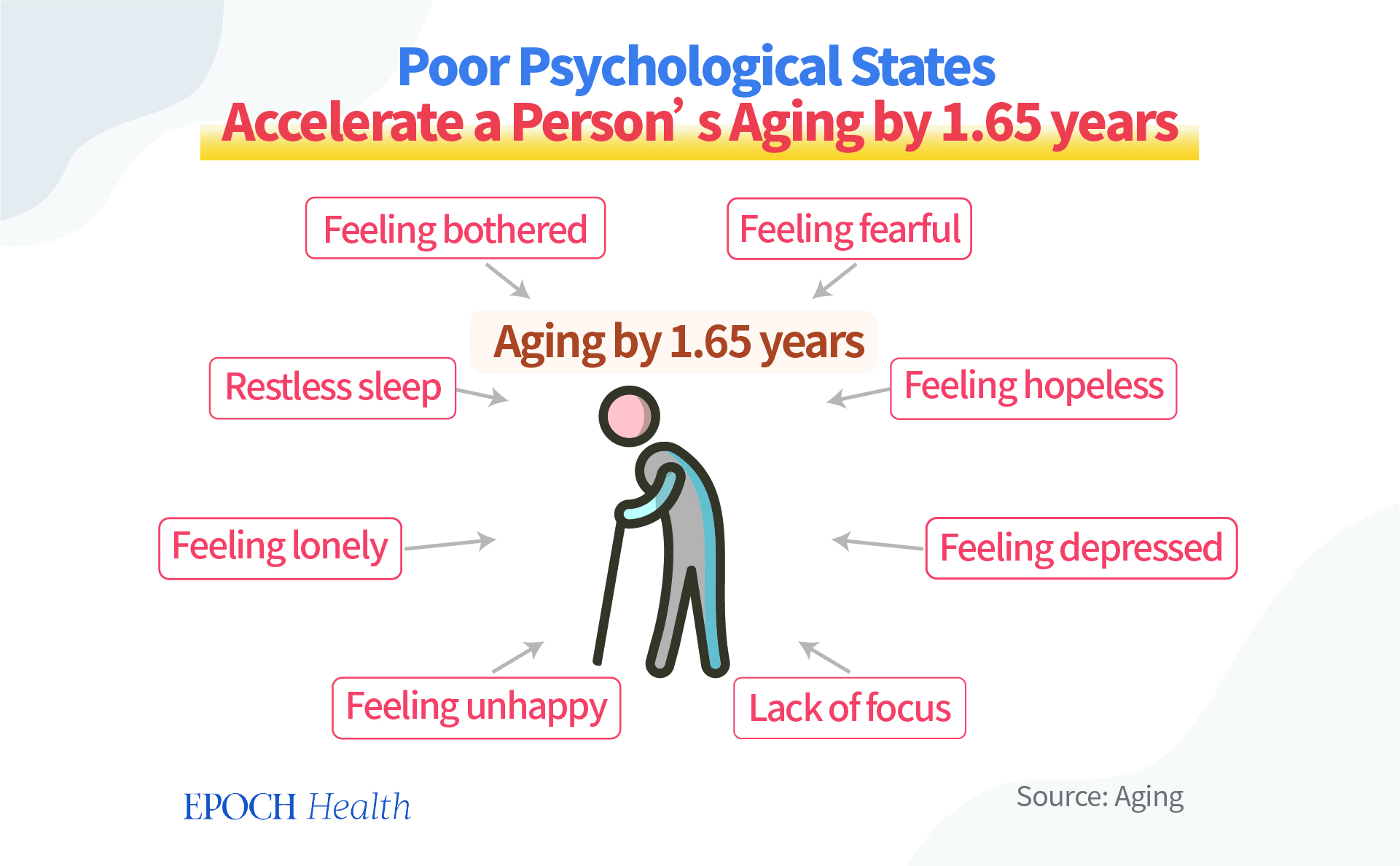 “Mental and psychosocial states are some of the most robust predictors of health outcomes—and quality of life—yet they have largely been omitted from modern health care,” said co-author Manuel Faria of Stanford University.

There is a difference between a person’s biological age and chronological age.

In a 2022 study, the researchers developed a statistical model to calculate biological age and gave it a figurative name: the aging clock. A person’s biological age can be obtained with the aging clock by an input of the person’s blood biochemical indicators, blood pressure, heart rate, marital status, living area, lifestyle, etc.

In addition to psychological factors such as stress, loneliness, mental health, and negative perceptions of aging, there are several psychosocial factors that accelerate aging, including negative fateful life events and modern lifestyle.

There are some causes behind negative psychological states that accelerate the aging process.

Why can negative psychological states affect a person’s biological age so prominently? When assorted negative feelings accumulate, the human body will undergo a series of subtle reactions, and many physiological indicators will also change accordingly. The body secretes stress hormones and other chemicals, and oxidative damage increases. Aging-related genes are therefore stimulated, creating instability in the body’s life rhythm.

Under stress, the body produces large amounts of glucocorticoids, which impair almost all body tissues and accelerate the aging process. Glucocorticoids are associated with memory and cognition, causing epigenetic changes in DNA and affecting DNA methylation associated with aging, which can contribute to arteriosclerosis and other health problems.

Animal studies have shown that competition-induced social stress can cause accelerated aging. Some researchers have calculated that accumulated stress across the course of life leads to an increase in biological age by 3.6 years.

Moreover, stress may exacerbate oxidative damage and shorten DNA telomeres in the human body. Both of which contribute to aging and increase biological age by 10 years. Studies of childhood trauma and post-traumatic stress disorder also suggest that this stress-induced accelerated aging may persist for years.

Among the blood biomarkers inputted into the aging clock, the increase of a crucial marker—cystatin C—indicates the decline of renal function. Decreased renal function is a major risk factor for increased all-cause mortality in the general population. Furthermore, abnormal cystatin C levels may be associated with new-onset depressive symptoms.

The Swift Rise of Unhappiness in Recent Years

The sad thing is that on a whole, our psychological state is increasingly worse: We feel unhappier and lonelier.

According to Gallup, the unhappiness of the global population has been rising over the past 15 years and is now at a record high. People feel more anger, sadness, pain, worry, and stress than ever before. If the negative experience index ranges from 0 to 100, people’s unhappiness has risen from 24 in 2006 to 33 in 2021. 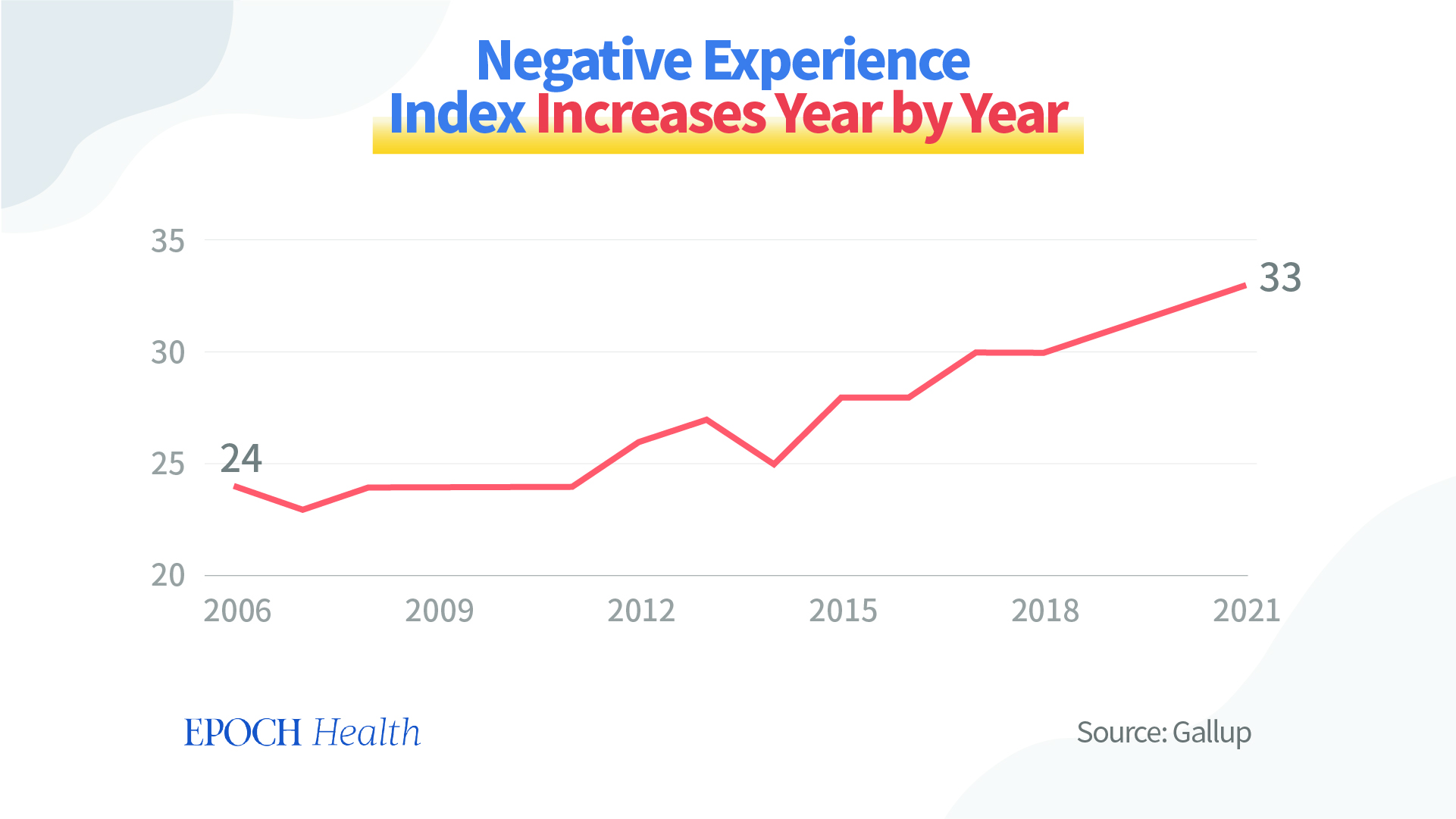 Loneliness has increased substantially since the outbreak of COVID-19.

An online survey of 950 Americans conducted by Harvard University in October 2020 showed that 36 percent of all Americans—including 61 percent of young adults aged 18 to 25 and 51 percent of mothers with young children—feel serious loneliness. The report also revealed the dire costs of loneliness, including premature mortality and a wide array of severe physical and emotional problems, such as depression, anxiety, heart disease, substance abuse, and domestic abuse.

A Way to Change the Psychological State and Reduce Biological Age

How can we change our mental state and reduce unhappiness? Numerous studies have found that apart from improving diet, being close to nature, and exercising regularly, maintaining compassion for oneself and others can also lead to a positive psychological state and delay aging.

Compassion is defined by scholars as the sensitivity to suffering in others with a commitment to help alleviate it. In contrast to empathy, compassion is not simply the ability to recognize and experience the psychological states of others, it also requires motivation followed by action. Not only that, it encompasses being self-compassionate. 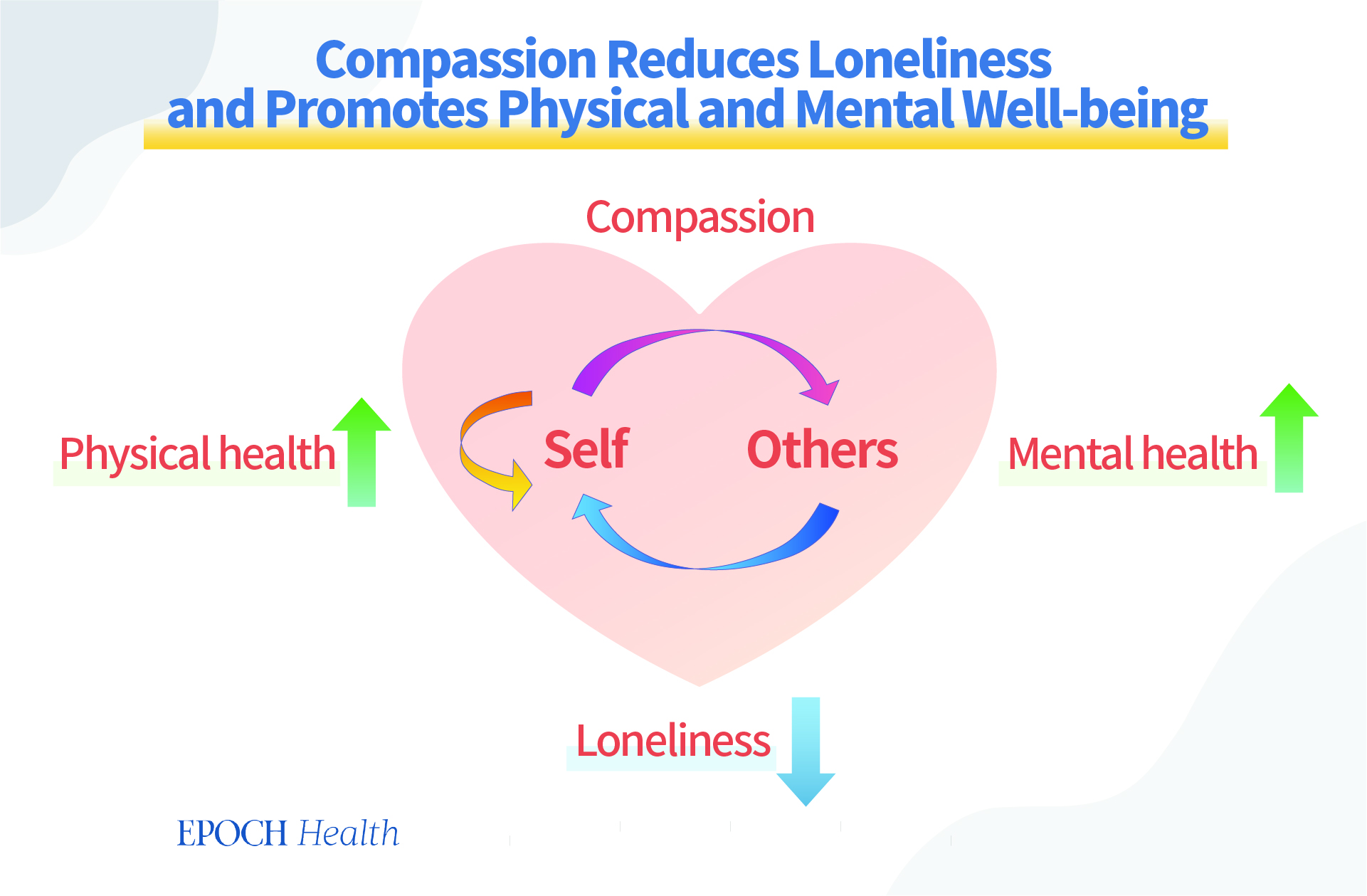 Compassion improves mental and physical well-being in various aspects, which can be manifested in reduced loneliness, enhanced happiness, decreased cardiovascular risk and inflammation, and improved diabetes.

A study published in Transitional Psychiatry conducted a 10-year follow up of 1,090 American adults. Researchers examined the physical and mental effects of compassion toward self (CTS) and compassion toward others (CTO) by making phone calls and filling out forms. The results showed that an individual who consistently had higher levels of CTS and CTO was less lonely years after.

If an individual starts out with low levels of CTS and CTO but changes afterward, his mental well-being will also improve accordingly.

The positive effects of compassion on health are greater than the adverse effects of smoking and drinking. This echoes the finding at the outset of the article that poor mental states accelerate aging more than smoking.

This is because compassion and good deeds can enhance the connection with others without making them feel threatened. People are likely to reciprocate with more responses and warm returns. Moreover, CTS and CTO are reflective of empathic abilities—understanding the emotions and perspectives of others—which reinforces more valuable social relationships.

In the post-pandemic era, people experienced increased depression, anxiety, and stress, as well as a decreased sense of social security.

A study involving adults from 21 countries and regions in the context of COVID-19 pandemic also demonstrates the general protective effect of compassion on people. The compassion refers to CTS, CTO, and compassion from others, that is—three directional flows of compassion.

The results show that, with more compassion to self and others, an individual has less psychological distress and a higher sense of social security. An individual can be less depressed if he is being compassionate to others. Reduced depression, anxiety, and stress come along if an individual is self-compassionate. Compassion from others may alleviate the fear of looming health risks such as that of the pandemic onset, and increase the sense of social security.

However, actions that express compassion and kindness are more beneficial than merely holding thoughts of compassion or empathy.

Also, studies have shown that individuals who meditate with love and compassion for others have longer DNA telomeres and are less likely to age.

Important Notice: This article was originally published at www.theepochtimes.com by Flora Zhao and Health 1+1 where all credits are due.