Did you know that we eat an oil almost every day that increases the risk of cancer and heart disease? It is palm oil, which is commonly found in processed foods. As long as you are not eating whole food, you’re likely eating palm oil.

Palm oil is extracted from palm pulp or palm kernels and has a wide range of uses. It is mainly found in processed foods.

Hsiao-Wei Chen, a nutritionist with a doctorate in food science, said that palm oil is actually ubiquitous in processed foods, and that emulsifiers and stabilizers may also contain palm oil.

As palm oil contains a large amount of saturated fat (40 percent to 50 percent of total fat), it has a higher stability, which allows food to be better preserved. Also due to its high saturated fat content, palm oil is suitable for frying food and can even withstand multiple high-temperature frying. Of course, palm oil is also cheaper than other oils.

These factors are the reasons why palm oil is widely used in processed foods. In fact, even baby formula contains palm oil. When manufacturing milk powder, animal fats must be extracted, as animal oil contains contaminants such as environmental hormones and antibiotics. Therefore, it is strictly stipulated that infant milk powder cannot contain animal fats. After the animal fats are extracted, vegetable fats and oils such as soybean salad oil, olive oil, or palm oil are added. And palm oil can play a role in stabilizing milk powder. 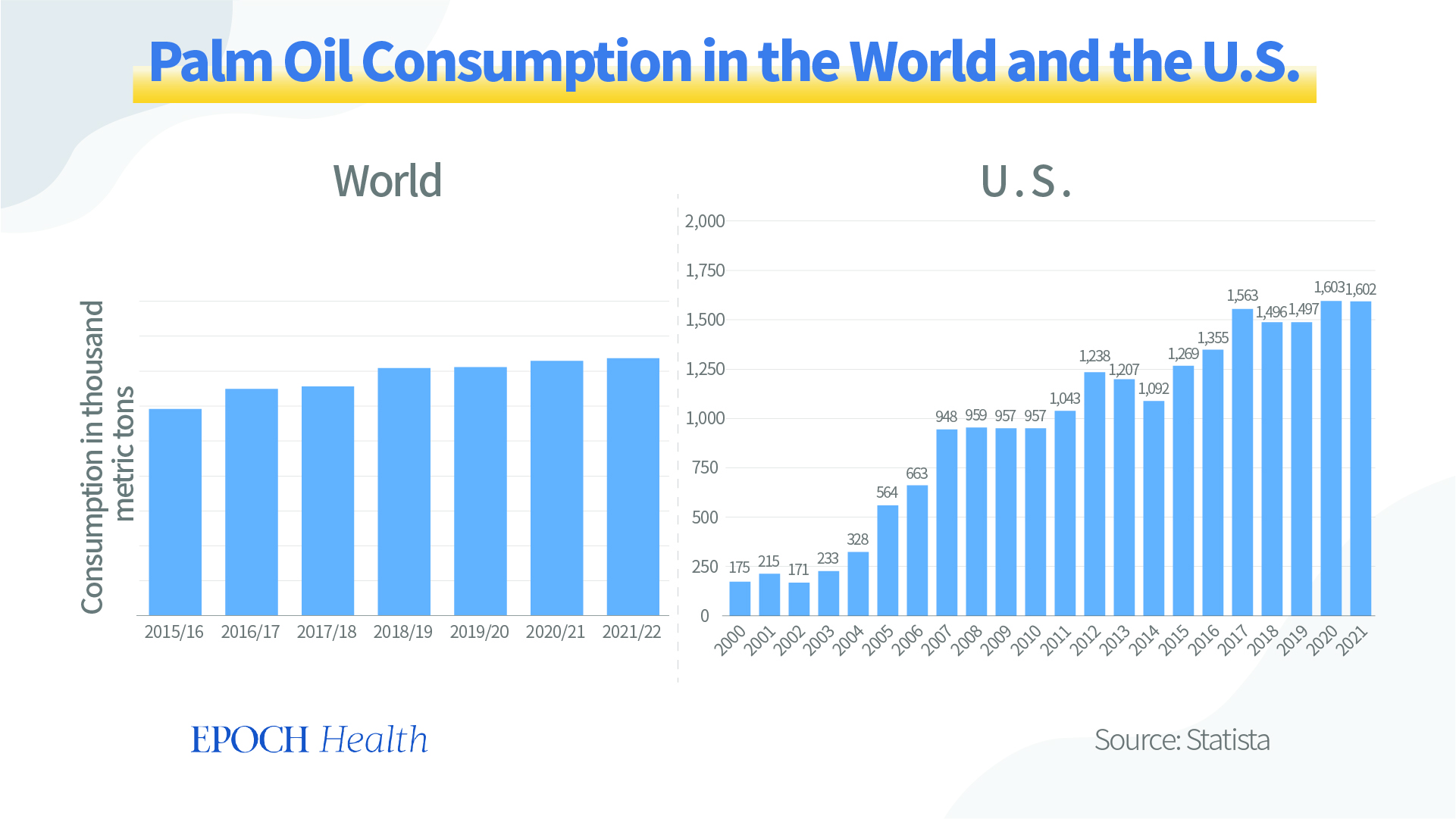 The Research Center for Environmental Trace Toxic Substances (RCETTS), which is a research center of Taiwan’s National Cheng Kung University (NCKU), was commissioned by Taiwan’s National Science and Technology Council to conduct research on 280 pieces of commercially available food. In 2021, the research results were published, which stated that palm oil contains the most 3-monochloro-1,2-propanodiol (3-MCPD) and glycidyl fatty acid esters (GE)—products of vegetable oils in the refining process which are suspected to cause cancer.

Vegetable oil needs to go through high-temperature deodorization and decolorization steps, during which 3-MCPD and GE are produced. They will be converted into free-state 3-MCPD and GE following ingestion.

Ching-Chang Lee, distinguished professor, vice president of NCKU, and director of RCETTS, said that the test found that the two substances—3-MCPD and GE—were most abundant in oils and fats, among which palm oil contains the highest amount. The second place is confectionery and biscuits, and the third is compound food. The ingredients of the latter two also contain palm oil.

In addition, dietary palmitic acid (PA) may cause metastasis.

Saturated fat in palm oil mostly exists in the form of dietary palmitic acid (PA). However, PA may cause cancer metastasis, and the metastasis or spread of cancer is the main cause of death in cancer patients.

A study published in Nature in 2021 shows that PA in palm oil boosts the metastasis in oral carcinomas and melanoma in mice. The researchers noted that fatty acids in other oils, such as olive oil and flaxseed, did not exhibit such a hazard.

The oil used to fry food must be able to withstand high temperatures, such as palm oil, which has more saturated fat. In fact, palm oil is most commonly used to fry food.

In addition, during the repeated frying process, palm oil produces 3-MCPD and GE.

In addition, the repeated heating of palm oil to cook food can easily lead to atherosclerosis that causes cardiovascular disease.

In one study, researchers fed healthy mice a diet made with fresh palm oil and food made with palm oil heated five times and 10 times.

It was found that the blood vessels of the group fed with repeatedly heated palm oil exhibited atherosclerotic changes. In particular, the rats that consumed palm oil heated 10 times had a significant increase in aortic intima thickness and large atherosclerotic plaques.

The study showed that for each additional kilogram of palm oil consumption per person in developing countries, ischemic heart disease mortality increased by 68 per 100,000 people. Even the inclusion of other sources of saturated fat, including beef, pork, chicken, coconut oil, cheese, and butter, did not significantly alter the high association between palm oil and ischemic heart disease mortality.

In the literature on palm oil, there are many arguments in favor of the consumption of palm oil, including that it contains nutrients such as vitamin E, carotene, and phenolic substances, but most of these studies come from Malaysia, one of the major palm oil producing countries.

Lee said that the quality of an oil product should be viewed from all aspects. In addition to the oil itself, there is also the process of refining, cooking, and use. He said that the research on 3-MCPD and GE is to hope that the producers of palm oil will change the refining process to reduce the amount of carcinogens and the risk of consumption. At the same time, the government also has a responsibility to continue to regulate standards and assist the producers to improve. Regardless, it is still recommended to buy less food labeled with palm oil.

Important Notice: This article was originally published at www.theepochtimes.com by Camille Su and Health 1+1 where all credits are due.